Most young men, at the start of their sexual lives, ‘come’ quickly during intercourse, and this is probably a normal part of their sexual learn­ing experience. Being highly sexed and easily aroused, they may be unable to hold off an orgasm until the female partner is also on the brink of one.

With increasing age, some men find that controlling their orgasm becomes steadily easier. But others find they continue to come too quickly, for both their own and their partner’s satisfaction. In fact they may reach orgasm even before penetration, or only a few seconds afterwards. Prolonged sexual union is thus impossible, which damages intimacy between the partners and may threaten the relationship itself. The man may feel depressed and inadequate, and this can sometimes lead to other sexual problems, such as failure of erection or loss of sexual desire. The woman also suffers, feeling undesirable and unloved.

Premature ejaculation, or com­ing too quickly, is best defined as ‘persistent or recurrent ejaculation with minimal sexual stimulation before, upon or shortly after pen­etration, and before the person wishes it’.

1. Aim to make unpressured time for these sessions about three times a week. Try to ensure that you will not be disturbed – take the phone off the hook.

Make sure you are warm enough and comfortable, and remove all clothing.

2 Make a strict agreement between you that, in the early stages of treatment, genital contact and intercourse are not permitted. This removes all pressure to perform or be aroused, and allows proper relaxation.

3. One partner lies back and relaxes while the other plays an active role, touching and caressing the other anywhere except the genitals and breasts. The person caressing should be assertive, exploring areas that they may never have touched before. The person being caressed should relax and aim at focusing on the sensation of being caressed. If they do not like what is being done to them,they should protect themselves by moving their partner’s hand elsewhere.

4. The person being caressed should be aware of ‘spectatoring’, i.e. watching him- or herself being caressed in a detached way, rather than participating fully in it. This commonly happens, but becomes easier as relaxation occurs and the strangeness of the situation wears off. Relaxation and abandonment are the keys.

5. Try not to talk very much, and use non-verbal cues to communicate. The person being caressed can let his partner know what he likes or dislikes by removing the hand, putting his own hand on his partner’s to increase or decrease pressure, or change the pattern of touch, grunt or murmur words of encouragement and approval. He should not take charge, however, and should basically remain in the receiving role.

1. When you are both comfortable with the first stage, move to the second stage which is similar to the first except that this time breast and genital touching and kissing are allowed.

2. Put all the patterns of communication you established in the first stage to good use. With genital contact, small changes in pressure or direction can have a large effect.

3. Although the person who is being caressed may become aroused and even climax, orgasm is not the aim of the exercise, and the session need not end simply because of orgasm. Do not worry if something that felt good yesterday doesn’t bring pleasure today – it is normal for body sensitivity to vary from day to day. Again, beware of ‘spectatoring’. Relax and enjoy the sensations.

4. Massage oils and lubricants can be used to enhance the pleasure, especially when touching the genital areas.

1. This stage deals specifically with premature ejaculation. After mutual pleasuring as described above (but before the man has had an orgasm) the man lies on his back and relaxes while the woman stimulates his penis till he is at the point of orgasm. At his signal, she stops stimulating him, until the urge to climax recedes. She then starts stimulating him again. 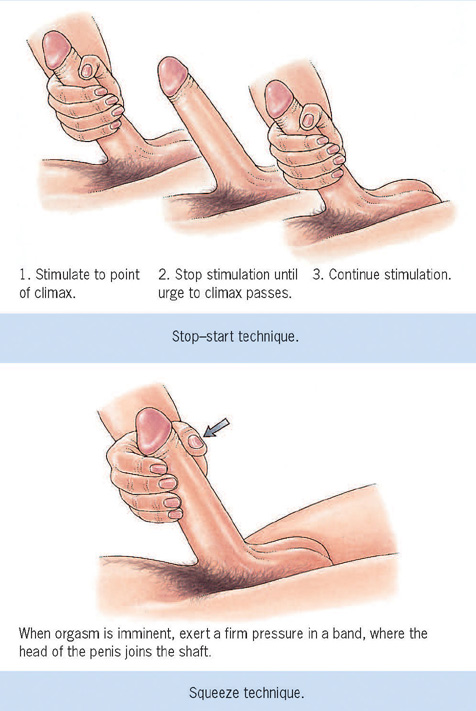 2. Instead of just stopping when orgasm is imminent, she may also employ the ‘squeeze’ technique, by grasping the head and shaft of the penis with her whole hand, the thumb and first two fingers exerting pressure on the area where the head joins the shaft. She maintains this pressure for 15–20 seconds, and then starts stimulating him again.

3. This process is repeated three times before the man is allowed to reach orgasm the fourth time.

4. Later, the use of a lubricant to simulate vaginal lubrication may be introduced.

1. After touching and caressing as above, the woman sits astride the man and gently inserts his penis into her vagina. At first she does not move, but simply allows her partner to feel and enjoy the sensation of this. If he is close to orgasm she removes his penis and waits, or squeezes it as described above.

2 Once the man has become used to this sensation, the woman may move slowly with his penis inside her, again stopping if he is close to orgasm.

3. The next step is for the man to thrust, stopping and starting according to how he feels. He should, by now, fully recognise the sensations he has before orgasm, and h 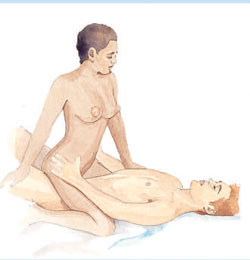 ave found ways to control this.

4. The man may slow or modify his thrusts instead of stopping, as better control is achieved.

5. The couple may proceed to full intercourse, using the principles that they have learned and adapting them as they wish.

Other surveys have found that about four per cent of men ejaculate within one minute of entering the vagina, and 75 per cent within two minutes.

There are many theories about this. Some believe that early sexual experience in hurried circum­stances, i.e. in the back of a car or if there is a danger of discovery, trains a man to ejaculate quickly. 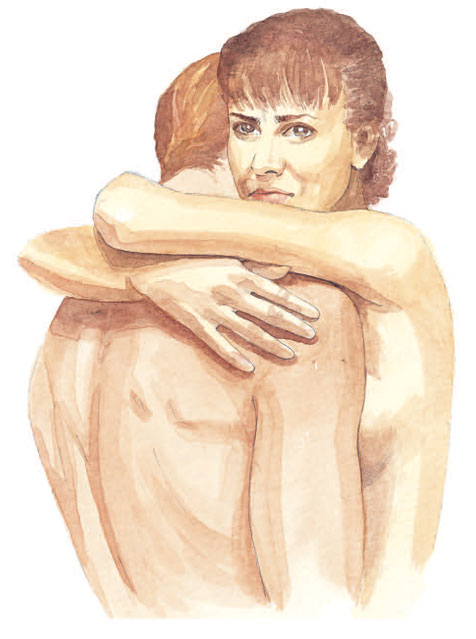 The well-known sexologist Helen Singer Kaplan believes the root of the problem lies in the man’s inability to recognise, and therefore control, the sen­sations that occur just before orgasm, and many sex therapists endorse this theory. She com­pares it to a child learning how to hold urine – which the child cannot achieve until he recognises, becomes used to and gains control over what it feels like to have a full bladder.

Physical causes are very rare, although if a man has had no problem previously and no change in circumstance (i.e. a new part­ner), prostate or neurological dis­ease needs to be excluded by a doctor.

For some men, using a condom to lower sensation can make the difference. An anaesthetic gel (such as lidocaine) on the penis may also make ejaculation easier to control. This is available at chemists without a prescription.

Standard treatment involves sex therapy, although drug treatment is also available. Researchers have found that newer antidepressants (such as Sertraline) can delay ejaculation and increase satisfaction for both patient and partner. Inter­mittent use seems as effective as continuous use. Side effects, how­ever, may include nausea and lowered libido.

Sex therapy for most cases of premature ejaculation is successful, sometimes within weeks, but re­quires good communication be­tween partners and a disciplined approach.

Enlisting the aid of a sex ther­apist is helpful for many couples, because it is easier to follow a set programme, and certain ‘do’s and don’ts’, if these are spelled out by a figure of ‘authority’ outside the relationship.

A sex therapist can also educate the couple about their sexuality, help to explore and release the anxiety or acrimony that may have accumulated around the issue, and provide encouragement and support. Occasionally, the therapist may recommend relationship counselling before the problem of premature ejaculation is tackled.

However, if both partners are well motivated and basically at ease with their sexuality, and the relationship has not suffered as a consequence of this condition, it is perfectly possible to follow the series of exercises at home.

Most therapists use a combin­ation of ‘sensate focus’ followed by the ‘stop–start’ technique, or the ‘squeeze’ technique.

Sensate focus is a method de­veloped by the famous sexologists Masters and Johnson, and is de­signed to allow the couple to re­discover the pleasures of simply touching and stroking each other in a relaxing way, without pressure to become aroused or reach orgasm, and therefore removing the anxiety to perform.

For many couples, their feelings about sex will have become too focused on orgasm, and their abil­ity or inability to give each other pleasure. Sensate focus provides a way for the couple to start all over again.

In the stop–start technique, the woman masturbates the man till he is near orgasm and, at his signal, she stops till he feels the urge to reach orgasm diminish. She then starts stimulating him again, and the process is repeated several times before he is allowed to reach orgasm. In the squeeze technique, the woman squeezes the penis at the point of orgasm for 15–20 seconds, until the urge to reach orgasm is lost and the erection diminishes slightly. Again the process is repeated several times before orgasm is allowed.

These two techniques work, because they familiarise the man with the sensations just before orgasm and, in a stepwise manner, allow him to gain control over them. Some men find that once they learn the control they keep it; others may have to repeat the exercise at certain intervals.

It should be stressed that the general principle of sex as a method of relaxation and mutual pleasuring, and not simply as a vehicle for or­gasm, is a good one to keep in all relationships. The exercise described may need to be repeated at inter­vals over the following months.

The success rate is excellent, with therapists reporting a greater than 90 per cent ‘cure’ after 3–4 months.